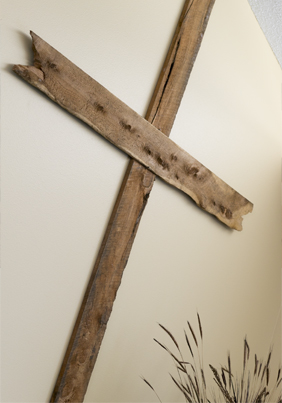 • That there is one God who is eternal, all-knowing, all-powerful, and holy
• That the Bible is God's revelation to man
• That the purpose of man is to glorify God
• That man is sinful and needs a savior
• That Jesus Christ, God in human form, died  for the sins of mankind, and that He rose from the dead.
• That man can stand justified before God only through the blood of Christ

The Gospel is the good news that Jesus Christ has paid the penalty for men's sins, allowing us to have a relationship with God. Christ's death makes it possible to be made free from the bondage of sin, and to live in heaven with God for eternity. Faith in Christ is a requirement of salvation. Ephesians 2:8-9

God gave mankind the opportunity to choose whether to obey God's laws. Adam, the first man, chose to disobey God's law, and that moment represents the fall of mankind. Romans 5:12

Everyone has sinned. Romans 3:23

The penalty for our sin is death--not just physical death, but spiritual death in the form of eternal separation from God. Romans 6:23

Our best efforts to live up to God's standard are not good enough. We cannot erase our own sin. Isaiah 64:6

To be saved, one must believe on Jesus and declare Him Lord. Romans 10:9 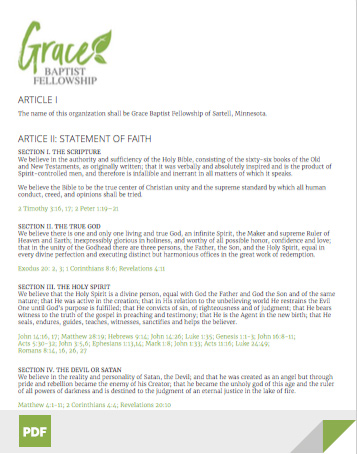 Grace Baptist Fellowship began about 1986 as a small Bible study group, meeting at a local restaurant and motel on the east side of St. Cloud, MN. The study was led by Pastor Kenneth Copley who was originally from Randall, MN.

After several years of meeting at this location and one other, the study group sought a permanent location and building. In God’s providence, property was kindly donated at 1197 Pinecone Road, Sartell, MN, by the family of George and Jackie Lahr. A building project was begun in fall of 1991 and finished in 1992. An addition was added a few years later. The church at this time was called Victory Baptist Church.

In the mid 1990s another Baptist church plant was started in nearby Sauk Rapids, MN, by missionary church planter Tracy Pennock. Pastor Pennock had been commissioned by the Continental Baptist Missions Board and by state MARBC churches (Minnesota Association of Regular Baptist Churches) which included Victory Baptist Church.

For various reasons by 2001 Victory Baptist Church’s membership had somewhat declined and Pastor Pennock’s Sauk Rapids group was looking for a permanent building location. In May the two church groups decided to merge under the new name of Grace Baptist Fellowship at the Victory Baptist location in Sartell on Pine Cone Road. By mutual agreement Pastor Pennock became the new pastor.

The merger called for a second building addition to be added in 2002. The addition was begun with help from church builders commissioned by Continental Baptist Missions. With the addition well underway, Pastor Pennock left in 2003, to begin a new church plant in Arizona. The addition was finished later in December 2003, and by 2004 Grace Baptist had become self supporting under the leadership of Rev. Mark O'Brien.

Pastor Mark O’Brien became associate pastor in 2002. He had graduated from Virginia Baptist Bible College in Fredericksburg, VA, in May 2000, and had earned his Masters degree from Andersonville Theology Seminary in Camilla, GA. He pastored at Grace from 2002 until March of 2013 when he resigned due to health issues.

Pastor Jim Goodew became Grace’s Interim Pastor in April 2013, and then was officially called as Pastor in January of 2014. He was originally born and raised in Austin, MN, where he was saved in the 8th grade following a message from God’s Word given at church. Pastor Goodew earned both his BS in Pastoral Studies and his MA in Practical Theology at Faith Baptist Bible College and Seminary in Ankeny, Iowa.  Prior to coming to Grace Baptist Fellowship, Pastor Goodew served as pastor at Faith Baptist Church in Brainerd, MN, for 26 years. He has had extensive post seminary training and experience in biblical counseling.

Pastor Goodew met his wife, Susie Paswaters, at Faith Baptist Bible College and Seminary in Ankeny, Iowa.  She is the daughter of former missionary parents to Hong Kong.  Together, Pastor Goodew and his wife have had six children, and two grandchildren. The Goodews enjoy the outdoors, particularly gardening and hiking. Pastor Goodew also loves fishing and hunting.

Pastor Goodew is burdened for the local church to faithfully, doctrinally, and practically proclaim God’s Word from the Bible.  He desires to help people come to know the Lord personally, and then also equip people to use their gifts and abilities in serving the Lord faithfully. His favorite verse is Psalm 16:11, “You will show me the path of life; In Your presence is fullness of joy; At Your right hand are pleasures forevermore.”

Therefore, if anyone is in Christ, he is a new creation. The old has passed away; behold, the new has come.